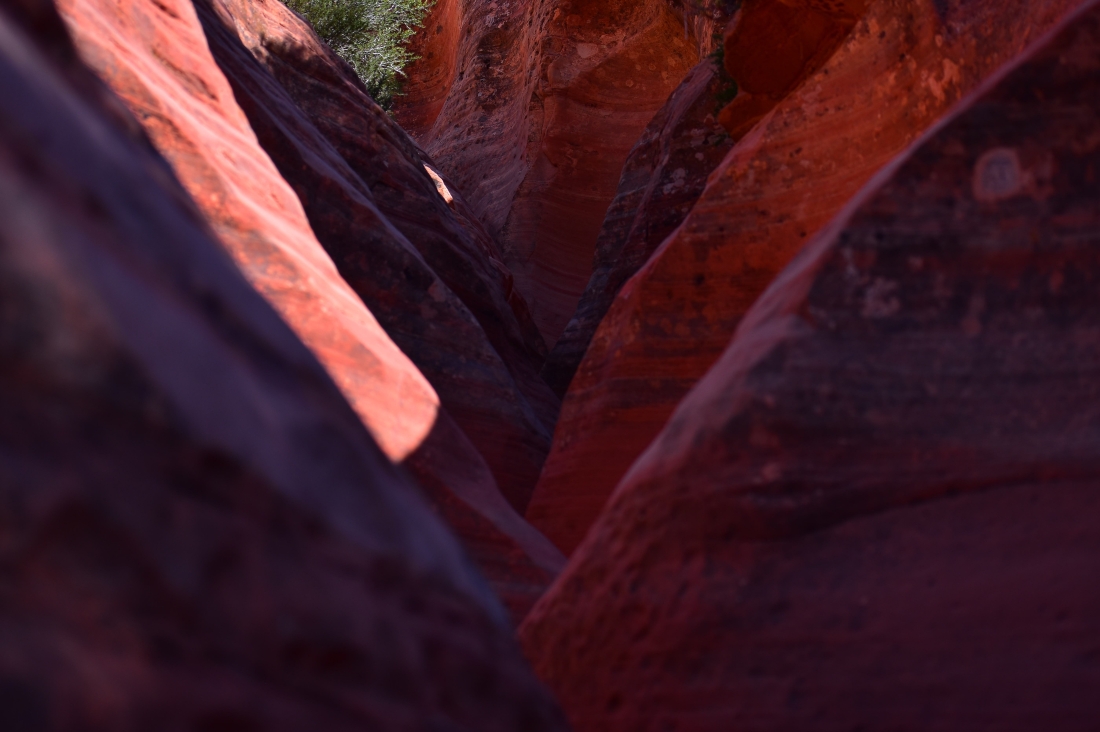 I don’t know about you, but I am always taken off guard about how different things look after the fact.

I had a chance to go out for a Saturday afternoon adventure.  The plan was that my family would come with me, but after a long day of projects the kids, and as a result momma too, were just plum wore out.  And anyone with kids knows that when they are wore out every little disappointment turns into the end of the world.

I, having a core-driven need to get out and be in the hills, needed to go.  So I set off on the 15 minute drive to the trail-head that led to the box canyon I was seeking to find that day.

With Sami, my adventure buddy, unloaded from the trailer and my back pack nestled in the seat next to me, I shifted Sami into first gear and headed down the dirt road that would lead to my destination.

After a few wrong turns and mental notes made on those various roads I finally found myself descending into the canyon.  As I drove up the bottom of the wash, it began to narrow with slick rock on either side encroaching in on my highway.

Finally, it was time to stop and continue on foot.  Immediately I found this mini slot canyon before me where the walls neatly folded inside of each other making a nearly perfect pattern.

I always deceive myself when I encounter something like this because I immediately get an image in my head of how I want to capture that scene.  It is where my amateurism shines through as typically I can’t quite duplicate what my eyes and my mind sees when I try to capture it on my camera.

After taking a couple of shots I quickly gave up and headed on the long hike that lay before me expecting to find some better stuff up ahead.

Hiking along I did find a shot here and there that I spent considerable more time and effort on.  But, really, nothing too exciting and ultimately the whole trip was a bit of a let down as the canyon just didn’t live up to the hype.  So after reaching the end of the canyon I made a hasty retreat back to Sami and on to home feeling somewhat let down about the whole trip.

A few days later I sat down to review a few of the pictures and see what turned out and what wasn’t that great.  As I swiped through and downloaded some of my favorites the first shots I took of the mini slot canyon came up in line.  I ended up taking two photos before giving up and moving on.  I downloaded both, as they were the only two of that particular feature, not paying much attention to them and hurrying to get to the others that I thought would glean more satisfaction.

Once downloaded I was able to view them in a higher quality state which always makes or breaks them.  Again swiping through I found some that I really liked and made the trip worth while.  Finally I arrived at this mini slot canyon again.

I paused on it as I took in the scene and re-lived that excitement again of when I had first seen it.  What I found was the first photo I took wasn’t focused well.  I really needed a tripod for what I was trying to achieve.  Then then the second photo had a better focus but was just  bit too under exposed making it a bit dark.

In the moment, I saw the light spot where the sun was shining down giving too much contrast, and how dark the image was coming out and gave up after two shots.  But viewing the photos now I could see the easy fixes that would have made the shot, quite easily, one of my favorites.

Suddenly I had the solutions I needed to make that experience a success and desired to somehow go back in time and do it over.  To spend the time that shot deserved rather than shoving it aside quickly when the reward didn’t come quickly or easily.

Fishing has become that thing that I wish I had more time to do and wish I was better at doing.

Living in a desert climate the opportunities to fish just aren’t very close by.  It seems like you have to travel to every spot, especially if you want some seclusion and quiet……and I want the seclusion and quiet.  So I just don’t get to go as often as I would like to.

Recently we had a chance to take a quick run to a childhood fishing spot as a family.  When the kids come fishing, I always try to prepare myself for the fact that I won’t be able to focus on MY fishing experience as much as I would like to.  This trip was no different.

The hits were slow but on a lure I kept getting one here and there.  Realizing that the species of fish we were aiming for wasn’t hitting I decided to change tactics.  So I went for a bait that was in ready supply.

It was easy to find because the buzzing was all around us.  So quickly I found quite possibly the ugliest bug ever created, a cicada, and pinched its wings and headed back for the dock.  Carefully I threaded it onto the hook of my daughters Tinkerbell pole and cast it out.

Nearly as instantly as it hit the water a fish surfaced and gobbled the cicada and I was reeling in a small small mouth bass.  Excitedly, everyone wanted the same bait and so dad was on bait duty as cicada after cicada was caught, hooked, and cast in the hopes of catching the next fish.

What built the frustration of the moment was that I had made catching a fish as simple as I possibly could have.  I had tied a bubble on the line as a visual indicator of when a fish bit the hook.  All that had to be done was to cast the hook, baited by dad, out into the water and watch the bubble until it dunked under the surface of the water.  Once the bubble dunked one just needed to set the hook and reel in the caught fish.

But what was happening instead was the hook, baited by dad, was cast out and the bubble was watched for 1.3 seconds before their attention was directed at the other bank where their cousins were fishing, or at a dragonfly that was fluttering lazily along the bank, or back at dad who was catching another cicada to bait another pole……

Before long mom or dad would be yelling “your bubble, your bubble” and a dazed J6 would searched frantically the surface of the water, trying to locate the bubble, which of course was hidden beneath the surface, so then our prompts would turn to “reel, reel!” and at about that time the bubble would resurface and the hook would be reeled in, bait-less and fish-less because the fish had plenty of time to realize that there was something “fishy” (pardon my pun) about that particular bug and spit it back out.

And so, again and again, dad would be on bait duty, cast duty, watch the bubble duty, and bait duty again instead of enjoying a rare moment to catch fish for himself.

After several rounds I threw out a freshly baited hook for J6.  The cicada was still buzzing it’s wings when it hit the water creating ripples and vibrations that I knew would quickly attract a hungry fish.  J6 was getting a bit frustrated with the cycle as well and wanted to catch a fish like others were that day.  So I encouraged her saying “this one is going to catch a fish right away, I know it.  So watch that bubble and as soon as you see it move you yank and reel.”

Just as I predicted, within seconds I could see a fish headed right at her bait.  “Here he comes?” I prompted excitedly and watched as the fish gulped up the bait and pulled the bubble under the surface of the water.  “See I told you!”  I said, very pleased with my fulfilled prophecy only to turn and see J6’s eyes fixed across the pond on the other shore completely oblivious to what was happening on the end of her rod.

That’s when it happened……”Dammit J6! Reel!”.  Surprised by my tone she jumped and began frantically to reel, but it was too late again.  The bubble surfaced and no fish was hooked.

Frustrated by the failing of the perfect scenario I had just set up for my daughter I launched into a hasty explanation as to why she needed to watch her bubble, and how I had told her that a fish would come right away to get it, and how when one did she wasn’t looking, and didn’t see her bubble bob, and that’s why she didn’t get a fish…….

Well, by this point her lip was quivering and she was headed into tears.  Realizing that I was spewing my frustrations at my daughter, bringing her to tears, I put the breaks on and knelt down to her level.  I calmed my voice and explained that I wasn’t mad but that I was simply trying to give her the best possible shot at catching a fish and by not following my instructions she was missing out on that chance that she wanted so badly.

She calmed, we hugged, and went on fishing.  In fact, she ended up reeling in the largest fish of the evening.

As kids do, the experience was quickly forgotten, no grudge was held, and we were best buddies pretty much immediately.  But I’ve hung onto it.  I’ve hashed it again and again.  Mostly because I am ashamed of how I reacted and that I allowed myself to swear in a response to my daughter but also because of the dark mark it left on such a fun, family day.

I found myself, again, wanting to somehow go back and correct that tiny block of time.  To simply enjoy the experience and allow her to learn from loosing the fish rather than from the fear of my disappointment. To somehow clean off that black mark so that the memory could be perfect.

Well, the hard truth is that there is no time machine that can travel back and allow us to alter those experiences.  Sure, it’s frustrating and a bit haunting as they happen so fast and so suddenly and are over in a blink of the eye leaving us pouring over our memory grasping at every detail.  Even if there was some sort of machine that could take us back, I doubt it would be as easy as a rare car hitting a speed of 88 miles per hour and leaving a couple of flamed-out tracks on an empty road.

Some of those haunting experiences that hang on in our memories from the past are life-altering.  So it could never be a simple thing to go back and change them.  And I guess, really, that’s the point.  If they are life-altering in our past, then maybe they can motivate some life-altering changes in our future.  Maybe that remorse and regret can be the catalyst we need in order to make those changes that would really mean something and that would really shape us for the better.